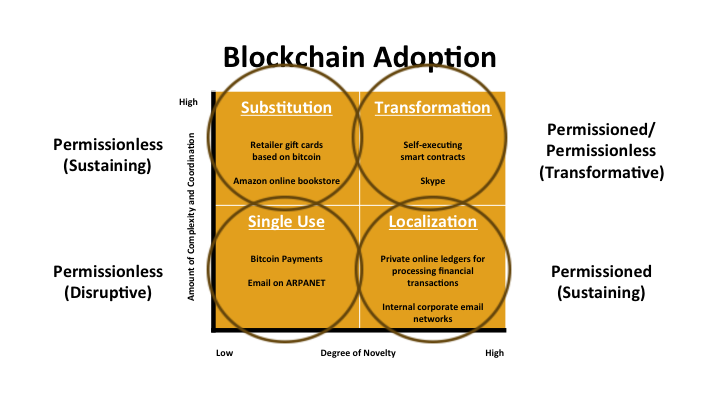 It’s obvious that awareness of blockchain and its potential is growing massively, with sectors across society learning about and embracing the technology.

Part of this awareness is driven by hype, of course. After all, Gartner placed blockchain near the peak of its 2016 Hype Curve:

But part is driven by the the potential of the technology. Many people are excited about how blockchain might be used to make existing business processes or solution more efficient. For example, there’s lots of attention around how blockchain can be used to improve international remittances, which today are very costly and operate very slowly.

Fewer focus on the potential for blockchain to help create entirely new business offerings — to enable new products or solutions that aren’t possible with the business tools available today. It’s very hard to envision what these might be — it’s like trying to predict something that will fill a need that no one is aware of until they see something that solves it. But we can be assured that clever entrepreneurs will examine all aspects of blockchain and experiment with them to develop new business offerings that will suddenly be something we can’t live without.

This isn’t new with blockchain. We’ve seen it across other new technology developments. When the US Government first made it possible to place commercial offerings on the Internet, there was lots of speculation about what it could be used for. It’s safe to say that nobody imagined streaming video as a likely offering, but today YouTube serves up more than three billion hours of video each month. Simply stated, humans are terrible at predicting the outcomes associated with new technology developments … or their desires associated with those outcomes.

Henry Ford captured this phenomenon brilliantly when he said “If I had asked people what they wanted, they would have said faster horses.” (OK, maybe he didn’t say it … but he should have!).

The interesting question is how long it takes a technology to move from an exciting object of speculation to something with real effect. In the case of blockchain, that is an important issue because it appears that its effect will, perhaps, be the most profound technology innovation in the last five hundred years. Why? Instead of blockchain providing a faster way to move atoms (car vs. horse) or a faster way to send bits (streaming video vs. broadcast TV), it will provide a faster way to exchange value (multi-party transfer with intermediaries vs. direct interchange between interested parties). The reason this question is so important with blockchain is that it has far broader significance than any other technology. Nothing is more important in economics than how value is exchanged — and, ultimately,  economics is core to much of what occurs in human society.

In “The Truth About Blockchain,” (Jan/Feb 2017 Harvard Business Review), two Harvard Business School professors examine the question of how fast blockchain will have real effect. I know Karim Lakhani, and it makes complete sense that he would be interested in this topic. In his previous work he has focused on crowdsourcing, open source development, and distributed innovation. Blockchain is a logical outgrowth of this focus.

I have great respect for Karim and his co-author, but I disagree. I think blockchain is going to arrive faster and with more bite than they expect; indeed, I think it will occur faster than most people expect.

To explain why I believe this, I decided to put together a video describing my perspective. In the video I describe how transformational innovation extends Clayton Christensen’s widely-known and popular “disruptive innovation.” I then go on to discuss how the authors predict blockchain will be applied, using their application terminology of single-use, localization, substitution, and transformational. I extend their analysis to how these application types might be used in permissioned and permissionless blockchain topologies. I close the video with a discussion of why I believe their prediction that it will take 30 to 40 years before blockchain has truly transformation impact is too conservative. Spoiler alert: I think it’s going to be more like five to 10 years — but you’ll have to watch the video to learn why!

I hope you enjoy it. But no matter what your opinion is, be sure to leave a thumbs up or down or a comment. I look forward to your feedback and thoughts.