My Dinner with Joel (Mokyr) 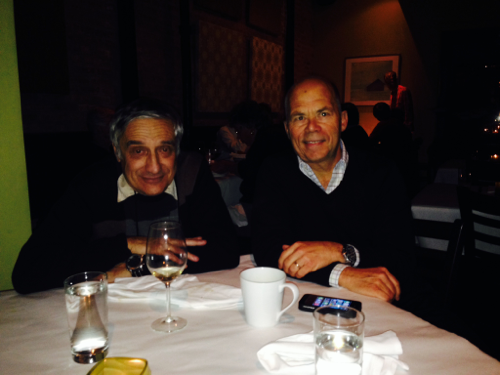 I had the privilege of having dinner with Joel Mokyr yesterday evening. Joel is the real deal — an economic historian who is a Northwestern professor and is, perhaps, best known for his enlightening book, The Lever of Riches, which examines this question: “How did the astounding technological progress of the industrial revolution come about?” I’m a big fan of Joel, and his books, and took the opportunity afforded me by being in Chicago for Cloud Connect to invite him to dinner.

It was an extremely stimulating evening, in which we talked about technology trends and an ongoing debate in academia about whether the economic growth (and enhanced human existence) afforded by technology development is about to flatten out. This thesis, advanced by Mokyr’s Northwestern colleague Robert J. Gordon and another academic, Tyler Cowen of George Mason, essentially says that the really big wins of technology have been developed as low-hanging fruit and looking forward, technology developments will bring much smaller gains. This might be summarized as “sewers vs. the iPhone.” The first transformed sanitation and had a direct impact on the dramatic extension of human lifespan witnessed over the past 100 years; the latter enables  countless teenagers to take selfies of their bellybuttons.

Mokyr holds a completely opposite opinion. His phrase is “you ain’t seen nothing yet.” He holds that we are on the cusp of enormous developments in life itself, based on insight into genetics, which will enable better health, longer lifespans, and new, improved species. I must say that I am in complete agreement with him. I don’t downplay the role of sewers — at all — but think that trivializing the digital connectivity of the iPhone (which is really a networked computer that happens to be able to terminate telephone calls) enormously underestimates the role of digital devices. Not to mention the fact that, as I constantly point out, the iPhone is just a stop — a way station — on the continued shrinking of networked computing devices that is next going to be known as “the Internet of Things.”

Of course, he notes, the role of an optimist is a difficult one — it’s nearly impossible to really foresee what will develop in the future. At dinner, he described a 1955 exercise in forecasting, in which a number of pundits were asked to predict what technologies would be important in 1980. Many of those surveyed thought that nuclear power would be well advanced — so much so that electricity would be boundless and nearly free. Well, we know how that turned out, although nuclear power is likely to become important once more at some point in the future. On the other hand, no one predicted any role for lasers, even though the technology was nascent at that time. This inability to really forecast how technology will develop is what supports his optimism — the thought that we really have no idea of what our society will create. For myself, I feel that we have the greatest number of scientists, technologists and academics in history, who can collaborate in ways unimaginable just 20 years ago, and that this will inevitably result in incredible developments.

So, sated with good food, wine, and conversation, I left my dinner with Joel satisfied will an evening well-spent.

At the airport this morning, I picked up a copy of Atlantic Magazine to read in the interminable minutes between takeoff and being able to turn on electric devices. This month is “The Technology Issue”:

In the lead technology article, James Fallows surveyed 10 experts to develop a list of the 50 greatest inventions since the wheel. Fallows sifted through all the nominated inventions and put together a ranked ordering. Number 50: The combine harvester, which mechanized the farm, freeing people up to move to cities and focus on other economic activities. Number 1: The printing press, which allowed easy replication and sharing of knowledge. While many of the nominations were put forward by one or a few of the experts, 10 of the 12 put the printing press on their list, and five ranked it in their top three.

It’s a fascinating list and thought-provoking, and I encourage you to read it. Not that I entirely agreed with it, mind you. The list puts the internal combustion engine as the 7th most important invention since the wheel, while relegating the assembly line to number 49. I won’t quibble about the engine and its place, but would argue that the assembly line should be far, far higher — certainly higher than gunpowder, which ranks number 14 (because it outsourced killing to a machine). From my perspective, most of what we think of as the 20th (and 21st) century is available because of the automation made possible because of the assembly line. The automobile, by the way, comes in at number 18, due to how it “transformed daily life, our culture, and our landscape.” True, but I would maintain that the transformation was only possible because the assembly line took cars from the playthings of the wealthy to the everyday possession of the common person. As a send-ahead, my next book will discuss both publishing (an industry made possible by the printing press), and the assembly line (which enabled a transformation of our society via its output of the cheap automobile).

So, imagine my pleasant surprise when I looked at the experts and found my new BFF, Joel Mokyr in this august list:

You owe it to yourself to pick up a copy of Lever of Riches and use it as foundation material to think about this question: what was it that came together to cause the explosion of technology now known as the Industrial Revolution, which has imposed more change — and improvement — in the human condition in 250 years than occurred in the million-plus years that went before? For myself, I’ll sit back in a revery and wonder about what the next 250 will bring — and I don’t think it will see a gradual downshift in invention and improvement.